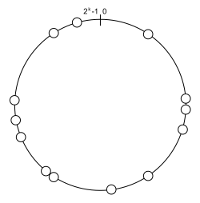 Figure 1: The ring structure of a Chord-style DHT, with nodes placed around the ring.

I’ve been experimenting with Distributed Hash Tables (DHTs) recently. A common base for DHT designs is Chord [1], where nodes place themselves randomly onto a ring-shaped keyspace; figure 1 shows an example.

This post investigates exactly how unfair it can get (TL;DR: very), and examines some options for improving the fairness of the span distribution (TL;DR: virtual nodes kind of work).

Chord-style DHTs map keys to values. Keys are drawn from a k-bit key space. It’s common to imagine the whole key space, between 0 and 2k-1, as a ring, as illustrated in figure 1.

If the keys actually in use in a particular DHT are uniformly distributed at random, then the load on a node is directly proportional to the fraction of the ring’s keyspace it takes responsibility for. I’ll assume this below without further comment.

Below, I’ll use n to indicate the number of nodes in a particular DHT ring.

Expected size of a node’s region of responsibility

My intuitions for statistics are weak, so I wrote a short and ugly program to experimentally explore the distribution of responsibility interval sizes. My initial assumption (naive, I know) was that the sizes of intervals between adjacent nodes would be normally distributed. 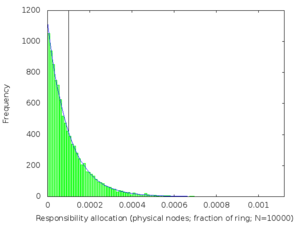 I was wrong! The actual distribution, confirmed by experiment, is exponential1 (figure 2).

In an exponential distribution, the majority of intervals are shorter than the expected length of 1/n. A few nodes are given a very unfair share of the workload, with an interval much longer than 1/n.

How bad can it get?

The unfairness can be as bad as a factor of O(log n). For example, in DHTs with 104 nodes, nodes have to be prepared to store between ten and fifteen times as many key/value pairs than the mean.

How can we avoid this unfairness?

One idea is to introduce many virtual nodes per physical node: to let a physical node take multiple spots on the ring, and hence multiple shorter keyspace intervals of responsibility. It turns out that this works, but at a cost.

If each physical node takes k points on the ring, we end up with kn intervals, each of expected length 1/kn. The lengths of these shorter intervals are exponentially distributed. Each node takes k of them, so to figure out how much responsibility, and hence how much load, each node will have, we need the distribution describing the sum of the interval lengths.

An Erlang distribution gives us exactly what we want. From Wikipedia:

[The Erlang distribution] is the distribution of the sum of k independent exponential variables with mean μ.

We’ve already (figure 2) seen what happens when k=1. The following table (figure 3) shows the effect of increasing k: subdividing the ring into shorter intervals, and then taking several of them together to be the range of keys each node is responsible for.

Figure 3. Effects of increasing k. The green areas show results from simulation; the blue curve overlaid on each plot is the Erlang distribution with μ=1/kn. The mean interval length, 1/10,000, is marked with a vertical line.

We see that the distribution of load across nodes gets fairer as k increases, becoming closer and closer to a normal distribution with on average 1/n of the ring allocated to each node.

The distribution gets narrower and narrower as k gets large. Once k is large enough, we can plausibly use a normal approximation to the Erlang distribution. This lets us estimate the standard deviation for large k to be 1/sqrt(k) of the expected allocation size.

That is, every time we double k, the distribution only gets sqrt(2) times tighter. Considering that the DHT’s ring maintenance protocol involves work proportional to k, it’s clear that beyond a certain point a high virtual-to-physical node ratio becomes prohibitive in terms of ring maintenance costs.

Where do these distributions come from in the first place?

Imagine walking around the ring, clockwise from key 0. Because we choose node IDs uniformly at random, then as we walk at a constant rate, we have a constant probability of stumbling across a node each step we take. This makes meeting a node on our walk a Poisson process. Wikipedia tells us that the exponential distribution “describes the time between events in a Poisson process,” and that summing multiple independent exponentially-distributed random variables gives us an Erlang distribution, so here we are.

The distribution of responsibility for segments of the ring among the nodes in a randomly-allocated Chord-style DHT is unfair, with some nodes receiving too large an interval of keyspace.

Interval lengths in such a ring follow an exponential distribution. Increasing the number of virtual nodes per physical node leads to load allocation following an Erlang distribution, which improves the situation, but only at a cost of increased ring-maintenance overhead and more hops in key lookups.

OK, so it turns out other people have already thought all this through

I should have Googled properly for this stuff before I started thinking about it.

A couple of easily-findable papers [2,3] mention the exponential distribution of interval sizes. Some (e.g. [3]) even mention the gamma distribution, which is the generalization of the Erlang distribution to real k. There are some nice measurements of actual DHT load closely following an exponential distribution in [4], which is a paper on improving load balancing in Chord-style DHTs. Karger and Ruhl [5] report on a scheme for maintaining a bunch of virtual nodes per physical node, but avoiding the ring-maintenance overhead of doing so by only activating one at a time.

Cassandra and its virtual nodes

Cassandra, a NoSql database using a DHT for scalability, defaults to 256 virtual nodes (vnodes) per physical node in recent releases. The available information (e.g. this and this) suggests this is for quicker recovery on node failure, and not primarily for better load-balancing properties. From this document I gather that this is because Cassandra never used to randomly allocate node IDs: you used to choose them up-front. New releases do choose node IDs randomly though. Here, they report some experience with the new design:

However, variations of as much as 7% have been reported on small clusters when using the num_tokens default of 256.

This isn’t so surprising, given that our Erlang distribution tells us that choosing k=256 should yield a standard deviation of roughly 1/16 of the expected interval size.

Tahoe-LAFS has a good solution to this, invented by Brian Warner. Basically use an independent (but deterministic and reproducible) permutation of the ring for each file.

Here's a long discussion in which I fail to persuade Brian to give up on this awesome hack and start doing the simple, badly-load-balanced design that everyone else does: https://tahoe-lafs.org/trac/ta... . The discussion even comes with a free buggy simulator that gives incorrect results!

Thanks Zooko, that's very interesting. I shall read more about that... after the ICFP deadline :-)