Back in March, I (crudely) measured the performance of js-nacl and js-scrypt running in the Browser.

Since then, emscripten has improved its code generation significantly, so I’ve rerun my tests. I’ve also thrown in node.js for comparison.1

The takeaway is: asm.js makes a big difference to NaCl and scrypt performance - on Firefox, that is. Firefox is between 2× and 8× faster.2 Other browsers have benefited from the improvements, but not as much.

What has changed since the last measurements?

Emscripten’s support for asm.js code generation is much better, and I am also now able to turn on -O2 optimization without things breaking.

On the minus side, the previous builds included a severe memory leak (!) because by default Emscripten includes a stub malloc() and free() implementation that never releases any allocated memory. The current builds include dlmalloc(), and so no longer leak memory, but run ever so slightly slower by comparison to using the stub allocator.

Safari seems to have severe problems with the current builds. I’m unsure where the bug lies (probably emscripten?), but many calls to crypto_box/crypto_box_open and scrypt() yield incorrect results. There are missing entries in the charts below because of this. (No sense in measuring something that isn’t correct.)

Since the previous round, Firefox has gained support for window.crypto.getRandomValues. Hooray! 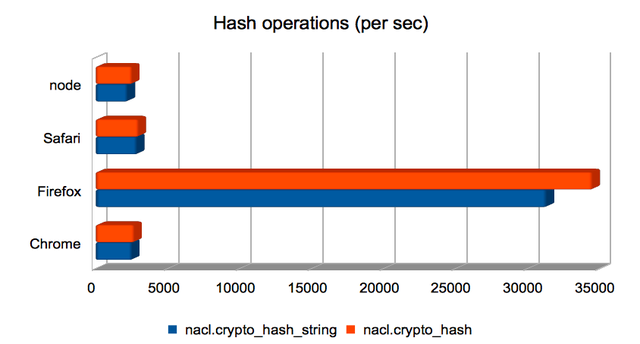 These are operations whose runtime is dominated by the computation of a Curve25519 operation. In three of the four cases, the operation is used to compute a Diffie-Hellman shared key from a public key and a secret key; in the remaining case (crypto_box_keypair_from_seed) it is used to compute a public key from a secret key. Firefox again dominates, but Chrome is not far behind.

This is one of the areas where Safari yields incorrect results, leading to a missing data point. I’m not yet sure what the cause is. 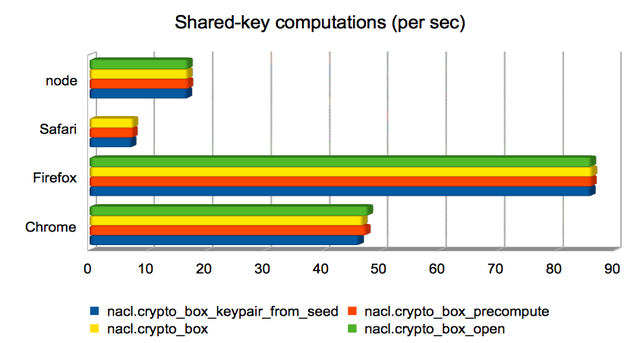 This is a thin wrapper over window.crypto.getRandomValues, or the node.js equivalent, and so has not benefited from the emscripten improvements. I’m including it just to give a feel for how fast randomness-generation is.

Safari wins hands-down here. I wonder how good the generated randomness is? 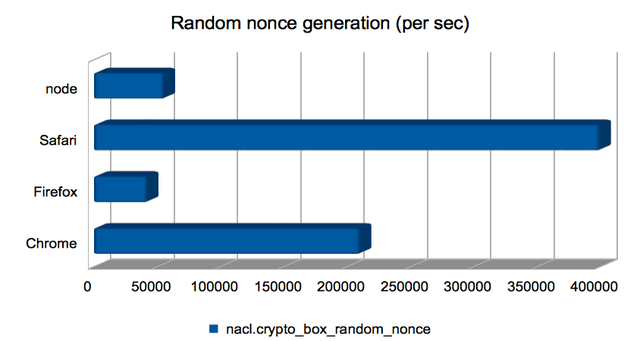 This another of the areas where Safari yields incorrect results. I’m not yet sure why. 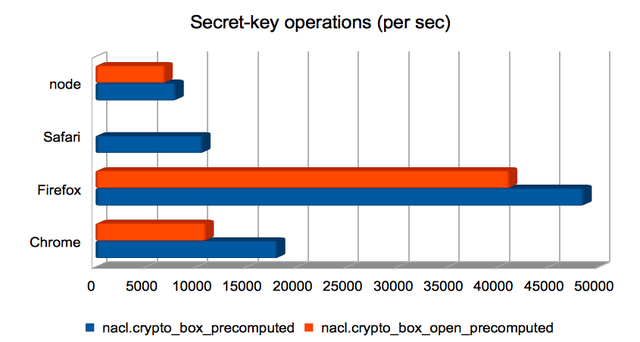 These operations compute an elliptic-curve operation, but use the result to produce a digital signature instead of an authenticated/encrypted box. Signature generation is much faster than signature validation here. As for the other elliptic-curve-heavy operations, Firefox is fastest, but Chrome is not far behind. 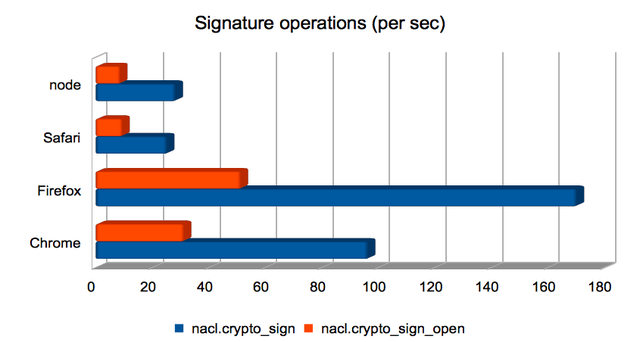 Here, Safari not only underperforms significantly but computes incorrect results. As above, I’m not sure why.

Firefox is about twice as fast as previously at producing scrypt()-derived keys. Both Firefox and Chrome are usably fast. 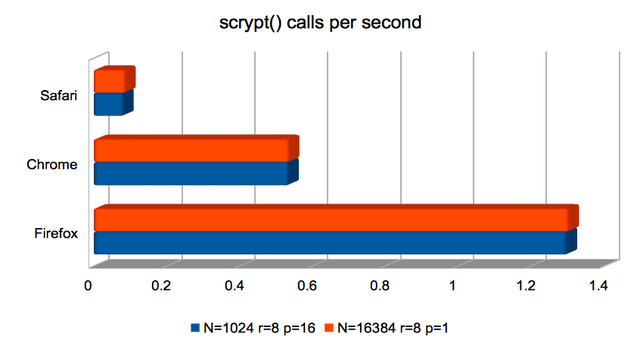 (Approximate speedups since January: Firefox improved by around 2×; the others were roughly unchanged. Chart.)

scrypt is still slow. Safari has problems with this code, or vice versa. Precompute Diffie-Hellman shared keys where you can. Emscripten + asm.js = very cool!